You are here: Home / Genre / Anthology / Making Her Ours by Mari Carr 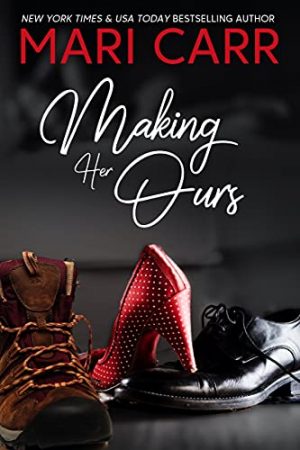 For the first time, you can own five of Mari Carr’s hottest menage romances in one steamy anthology. Set includes Waiting for Her, Sweet Thursday, Reach You, Full Position, and Everything Nice.

This anthology is a must-have for fans of menage and an amazing way to “test drive” five of Mari Carr’s most popular series, including Wild Irish, Sparks in Texas, Second Chances and Big Easy.

Waiting for Her – Jeannette’s past has taught her one thing–trust no one. However, not only are lovers Luc and Diego a danger to her libido, but also her heart. The two firefighters have had a hunger for Jeannette, and they’re willing to do whatever it takes to claim the shy, sexy cook.

Sweet Thursday – Soldiers Justin and Killian are blown away when quiet Lily proposes a one-night (three bodies) fling too tempting, too hot to resist. But just one no-holds-barred, explosive evening with the stunning woman will never be enough.

Full Position – Though Bella has crushed on Justin and Ned since her first day on the job, she’s smart enough to know a ménage with her hot bosses is probably number one on the list of workplace no-nos. But a genius wouldn’t say no to their exceptionally tempting offer — a no-holds-barred night of wicked fantasies at a local sex club.

Everything Nice – After Alex confesses that he wants both her and his best friend, Charlie, in his bed, Allie skips town like a thief in the night. Now, Allie is back in their lives, all grown up and more alluring than ever. What starts as a night of three friends catching up turns into intimate explorations in Charlie’s truck…and Alex’s shower…and his king-size bed…

This anthology will be available for a limited time only, so act fast.

Get Making Her Ours by Mari Carr at Amazon