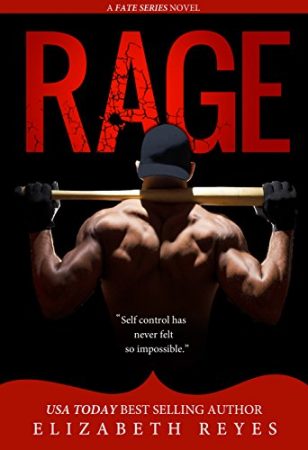 Fate is a Moreno Brother’s spin off series

Having made it to the major leagues, AJ “Rage” Romero is determined to shake the stigma his temper has earned him over the years. He’s finally managed a shaky hold of that elusive self-control.

Without warning, his coach and mentor’s brilliantly gifted granddaughter Clair and her equally amazing mother Addison Lara blow into AJ’s life. The harder he falls for Addison, the closer and more attached he becomes to Clair.

Having fallen so fast and hard, he agrees to respect the understandably protective single mother’s wish to forever keep the identity of Clair’s absent father unknown to everyone–including AJ.

But when the ugly truth about Clair’s dad begins to surface, the fire in AJ’s fiercely possessive heart is lit. As more of the troubling reality comes to light, his zero tolerance for secrets and dishonesty put his temper–and his love for Addison–to the ultimate test.

Self-control has never felt so impossible.

RAGE is a STANDALONE sexy romance with a alpha male hero that will make you tremble. It has an HEA and NO cliffhanger!! It is suitable for ages 17+

Get Rage: Fate #5 by Elizabeth Reyes at Amazon