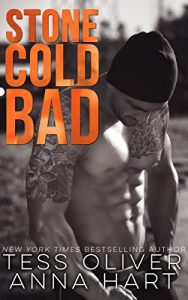 New York Times Bestselling Author Tess Oliver and Anna Hart have teamed up to bring you the sexiest, baddest bad boy around in the first Stone Brothers novel—Stone Cold Bad

Colt
Emotion, feelings and, hell, even love had been turned off in all of us Stone brothers long ago. Then Jade landed in my life. It was the last thing I ever wanted, to feel this way about someone. Attachments like this were only followed by heartbreak, and I wasn’t into heartbreak. I wasn’t into f*cking attachments.

Bad boy Colt Stone has a notorious reputation for being a tough and dangerous heartbreaker. A brutal childhood hardened him to the idea of any type of emotional attachment to anyone. When he becomes the unwitting accomplice in Jade Morrow’s escape from an abusive boyfriend, he soon finds that he’ll do anything to keep her safe. Has Colt found the one girl who can break through to his impenetrable heart?

When she runs away from her monstrous boyfriend, Jade Morrow has no place to go and no one to turn to. She accidentally lands in the arms of a handsome, tattooed stranger. Colt Stone is as formidable as he is appealing and Jade soon finds that he’s equally hard to resist. When her troubled past catches up to her, Jade discovers just how far Colt will go to save her.