You are here: Home / Price / Bargain Books Under $3 / Strip Away (Tap That Book 4) by Erin McCarthy 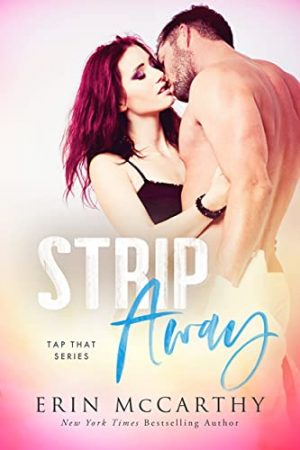 A hot hockey player. His boss’s daughter. And a one-night stand ten years in the making… Astrid Anderson Bouchard, a creative free spirit, has one last item on her birthday bucket list before she starts graduate school. She’s determined to hookup with Jesse Lambert and get over her long-standing crush once and for all. No more fantasizing about the guy who saved her very clumsy teen self from public humiliation at hockey camp. No more comparing him to every man she dates. One and done, and she can move on with her life.

Jesse Lambert has a plan. Sign a big contract with a new team for his remaining few seasons as a pro player, then retire back home to Beaver Bend, Minnesota. Find a nice woman, settle down, and start a family. No more one-night stands, no more casual sex with random women. The Tap That charity strip event weekend is his last chance to sew some wild oats, and the sexy stranger with the pink hair and the sweet laugh fits the bill.

Only after a very hot night together, Jesse learns Astrid is his new boss’s one and only daughter. Which is bad. Plus she’s furious with him for not realizing who she was before he stripped her clothes off. Not good either. And she’s accidentally revealed the naked truth about them to her father. That’s even worse. There’s only one way out of this sticky situation and it involves convincing Astrid to pretend they’re in a serious relationship so he doesn’t lose his lucrative deal with her dad. But will she give him an assist or send him straight to the penalty box?