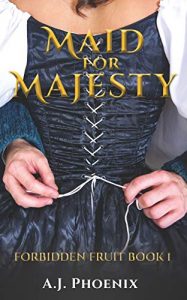 The #1 International Best Seller in Historical Erotica!
“The King’s love is fickle;
he’s gorgeous, intelligent and has power beyond the average man.
He doesn’t have to be kind.
He can give a glance or a smile and women will fall to their knees.
Being by his side makes you the most powerful woman in the world. But the moment he tires of you, or you become an inconvenience, you are nothing, no one.
I’ve heard of his reputation. He has left a trail of shattered hearts across Europe.If there will ever be a woman to win his heart, they’ll need to know his mind first…”

When cunning servant Madeline Black helps her mistress throw a party, she meets King Alexander, a seductive royal who can’t keep his eyes off her. Then, she is sold by her mistress and whisked away to Buckingham Palace to be a royal servant.

Though she knows his reputation and tries to focus on her duties, she constantly finds herself in his presence. Unable to resist, she is soon succumbing to her desires in every corner of Windsor and Buckingham.
But, as Napoleon moves across Europe, Princess Sofia of Spain takes refuge at Windsor and the pressure for Alex to marry her is high. Nonetheless, they continue to sneak around to enjoy the pleasures of their trysts. Despite their need for each other, can their relationship survive the society they live in?

Get Forbidden Fruit: Maid for Majesty Series Book1 by AJ Phoenix at Amazon

She married the king. She wanted the man.

Guinevere’s marriage to Arthur was a political partnership, never a romance. Merlin knows that the king’s court, newly restored at a medieval theme park, will only be complete if Arthur has his lady. Little did anyone suspect that once Guinevere gets a taste of twenty-first-century freedoms that this ancient queen would lose interest in belonging to any man—even a royal one.

It takes a dragon, and some passionate nights spent in each other’s arms, to lure her back to her husband’s side. Arthur is willing to accept Gwen’s help in protecting the new Camelot from a fae menace, but the bigger challenge will be wooing back Guinevere for a second chance at love…