You are here: Home / Archives for Lori Wilde 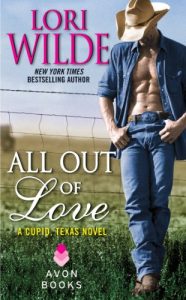 From bestselling romance author Lori Wilde comes All Out of Love, the sizzling second book in her Cupid, Texas, series, set in a town where every wish for love comes true.

Millie Greenway and her friends have tried for years to keep the Cupid legend alive in their hometown, but she’s not getting much help from her granddaughters. Lace Bettingfield knows the legend is bogus. As a teen, she left a letter at the Cupid statue and got nothing in return but humiliation. But now the guy she dreamed of is back in town, Lace begins to wonder if the tale might just prove to be true.

All Out of Love features the humor and heartfelt emotion that fans have come to expect from the author of The First Love Cookie Club and A Cowboy for Christmas.

Get All Out of Love: A Cupid, Texas Novel by Lori Wilde at Amazon
Get Audiobook 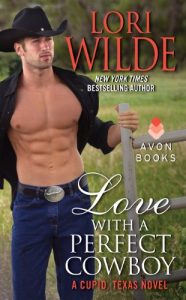 New York Times bestselling author Lori Wilde returns to Cupid, Texas, and asks the question: Do you ever forget your first love?

Melody Spencer had long-ago wiped the dust of Cupid, Texas, off her cute shoes . . . and done her best to forget the chiseled jaw and strong arms of cowboy Luke Spencer. Their families might be part of a long-time feud, but he was her very first love, even if it turned out they never wanted the same things.

But now Luke’s come striding back into her life, tempting her with the memories of long, lazy evenings and hot, passionate kisses. And he has an ulterior motive—as Mayor of Cupid, he knows Melody’s business savvy can help save their beloved hometown. His smooth talking might get her to Texas, but that doesn’t mean he’ll get her in his bed. Still, people do say love can be more perfect the second time around . . .

Get Love With a Perfect Cowboy: A Cupid, Texas Novel by Lori Wilde at Amazon
Get Audiobook 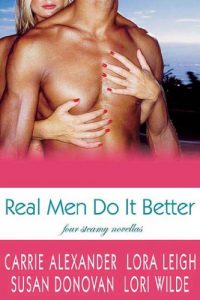 In this sizzing collection from some of romance’s hottest authors, you’ll read four sexy short stories about women who discover that real men do it better…

In Lora Leigh’s FOR MAGGIE’S SAKE, Maggie Chavez from Leigh’s sexy Navy SEALs series is in protective custody with a member of her former lover’s SEALs team. Joe, her ex-lover, thinks Maggie is hiding information from him about a powerful drug lord and the deaths of some SEALs. He intends to seduce her and get the information before she can sell it back to the drug cartel. But when a member of the notorious crime family captures Maggie and holds her hostage at gunpoint, Joe realizes how wrong he is, and only he can save her life.

In Susan Donovan’s BED AND BREAKFAST, a stressed-out corporate dynamo with designer boots and a bad attitude is sent to the New Mexico mountains to “get centered” or not come back to Los Angeles. She arrives at the rustic Windwalker Lodge north of Santa Fe, only to find the place in the middle of a renovation and the hunky owner in a pair of lounge pants with no shirt and no idea she was coming. She plans to leave on the first available shuttle the next morning, but one of the area’s notorious rains washes out the bridge, and she’s stuck. Though resistant at first, she eventually lets the beautiful setting and the extraordinary man give her a new perspective on life, love, and especially sex.

In Lori Wilde’s SIREN’S CALL, Annie Grave is back in her hometown, St. Augustine, looking after her grandfather’s dive shop as he lies bedridden with a broken hip. Though she is a Harvard MBA with a high-powered finance job in Manhattan and a boyfriend on the brink of proposing marriage, she’s never forgotten her first love, sun-bronzed dive instructor Duncan Stewart–or the day years earlier when she lost her virginity to him and he told her it was just a fling. But what she doesn’t know is that Duncan has regretted that decision every day since. Afraid of not being able to hold onto a smart, sexy, beautiful woman like Annie, he pushed her away and ran away from St. Augustine. But now she’s back, and so is he, and he’s cooked up a plan to win her back. After all, what girl could resist the lure of buried treasure, and a hot, handsome Scotsman to guide her on the hunt?