You are here: Home / Price / 99 Cents / Unsurpassed (No Rival Book 1) by Charity Parkerson 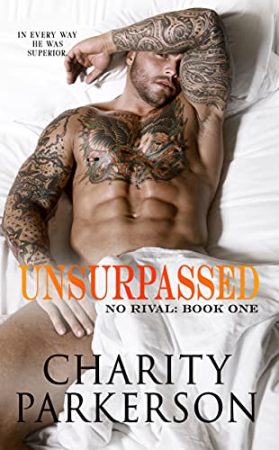 For months, Aubree has been obsessed with two men—best friends, Max and Ryan. She’s resigned herself to having her desires be nothing more than a late night fantasy. When the pair invites her to a weekend party hosted by a famous MMA champion, Drew Alexander, she accepts without a qualm. She never expects the two men plan to make her secret longings into reality. Unfortunately, that’s only half their agenda. When Aubree learns the men’s true intentions, she turns to Drew for help.

Drew is unlike anyone she’s ever met. He’s fun and playful. Dark and brooding. He’s everything she’s been searching for rolled up in a delicious package. Unfortunately, Max and Ryan aren’t finished with her yet. Aubree has to choose—does she cling to the friendship she’s had with Max and Ryan, or risk everything on one man who could make all her dreams come true?

This book was originally published with Ellora’s Cave publishing under the same title.