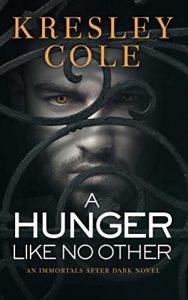 Acclaimed author Kresley Cole introduces a sizzling new series with this tale of a fierce werewolf and a bewitching vampire — unlikely soul mates whose passion will test the boundaries of life and death.
A mythic warrior who’ll stop at nothing to possess her . . .

After enduring years of torture from the vampire horde, Lachlain MacRieve, leader of the Lykae Clan, is enraged to find the predestined mate he’s waited millennia for is a vampire. Or partly one. This Emmaline is a small, ethereal half Valkyrie/half vampire, who somehow begins to soothe the fury burning within him.

A vampire captured by her wildest fantasy . . .

Sheltered Emmaline Troy finally sets out to uncover the truth about her deceased parents — until a powerful Lykae claims her as his mate and forces her back to his ancestral Scottish castle. There, her fear of the Lykae — and their notorious dark desires — ebbs as he begins a slow, wicked seduction to sate her own dark cravings.

Yet when an ancient evil from her past resurfaces, will their desire deepen into a love that can bring a proud warrior to his knees and turn a gentle beauty into the fighter she was born to be?

Get A Hunger Like No Other (Immortals After Dark, Book 1) by Kresley Cole at Amazon
Get Audiobook