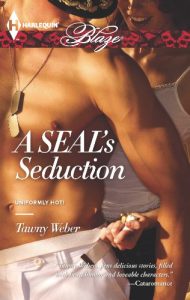 Subject: Navy SEAL Lieutenant Blake Landon
Current Status: Two weeks of enforced leave
Mission: Distract himself in any way possible
Obstacle: A woman who tempts him to break the rules…including his own!

Navy SEAL Blake Landon (aka “Boy Scout”) knows the rule book inside and out. Checked. Rechecked. But when a mission ends badly, his entire team is ordered on leave. And that’s when Blake sees the tall redhead whose dark eyes suggest that the rules—especially those in bed—are made to be broken.

Scientist Alexia Lane has sex on the brain—partly for work, but mostly because she needs a man who makes her girly parts do the happy dance. Her only no-no? No military dudes. But Blake’s rockin’ bod promises delicious pleasures, and Alexia is halfway to sexual Nirvana before she can find out he’s actually a Navy SEAL.

And where one rule is broken, more are sure to follow….