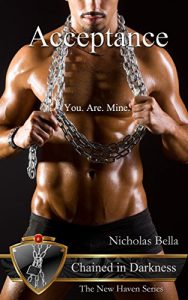 This book is the final episode of Season One.

It’s a new night and that means more of Theoden’s lessons, one of which I was still recuperating from. I was so out of control last night and if my current physical condition is any indicator, my brothers definitely had their way with me. As far as my relationship with Theoden goes, I can’t help but feel drawn to him. I feel as though he’s accepting me as I’m accepting him in some morbid way. I don’t know… maybe it’s because I know I don’t have any choices. There’s no way out for me. I’m his and we both know it. Maybe there’s still some fight left in me, some little nugget of Noel the man that hasn’t been consumed by Noel the vampire. One can hope. I do know that this night feels different, like I’m coming to the last lap of a long, rigorous race. What is to become of me when this night comes to an end?

Warning: This novelette series contains hardcore sexual situations between men, not meant for sensitive eyes. I’m talking crude, lewd and full of attitude. This series will most likely either offend you or get ya revved up. This series isn’t going to be pulling any punches whatsoever, so you’ve been warned. Mature Adult Content meant for readers looking for something dark, taboo, sexy, and unapologetic in their paranormal erotica. This is NOT a romance. This novelette is approximately 28100 words.

Get Acceptance: Chained in Darkness (Episode Six Season One Finale) by Nicholas Bella at Amazon