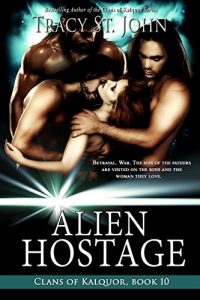 Tasha Salter is caught in a quandary: she wants to fall in love, but past trauma keeps her from commitment. The only people she trusts are her family, especially in this time of treason against the Kalquorian Empire. When she and her three-year-old cousin are abducted by the revolt’s shadowy leader, matters of the heart no longer apply. She finds herself in a battle for their survival.

Clan Falinset left Kalquor in self-imposed exile when their parents’ illegal activities threatened their honor. Dramok Falinset, Imdiko Nur, and Nobek Wekniz only want to be left alone to live their quiet lives. Yet the drumbeat of war is sounding as traitorous forces prepare to attack Kalquor. Worse still, the revolt’s leader wants his son Falinset at his side … and refuses to take no for an answer.

A wild escape attempt throws Tasha and her young charge into the reluctant care of Clan Falinset. With betrayal in their past and war in their future, there is no reason to find love. Yet passion flares between those who should be enemies, leading Clan Falinset and Tasha to realize that they are not on opposite sides after all. Together they have the chance to heal.

Yet the sins of the fathers have come to rest on the shoulders of their sons. Falinset must make an impossible choice: bow to his father’s blackmail and turn traitor to the Empire or doom his clan by saving the young princess of Kalquor and the woman he’s fallen in love with.

Get Alien Hostage (Clans of Kalquor Book 10) by Tracy St. John at Amazon