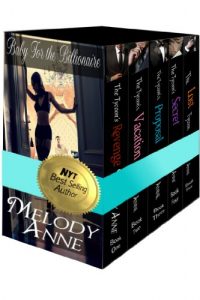 Get Melody Anne’s Bestselling “Baby for the Billionaire” series at a bargain price:

The Tycoon’s Revenge: Book One –

Derek Titan is a cutthroat business man that reached his way to the top without looking back once. He left his poor roots behind, and now is seeking revenge for the girl that not only got away, but took the last of his trust with her. Jasmine Freeman had loved Derek with a teenager’s naiveté and because her father lied to her, she spent ten years thinking he had left her, and she has a secret that he is about to find out.

Drew Titan decides it is time to take a vacation at one of his exotic resorts, and ends up literally running into Trinity Mathews while he is surfing. They end up having a steamy romance over the weeklong vacation, until she finds out he is the resort’s owner, and had lied to her.

Nicole Lander has no choice but to contact Ryan Titan, the boy she had loved beyond compare when she was a teenager. Her sister was in desperate need of a heart operation, or she would not live more than six months. Nicole had lied to Ryan when they were teen’s because she had not wanted him to find out about the abuse she was going through from her father.

Fighting to survive, Misty Elton takes one look at the man standing in front of her and knows she needs to make a decision – does she want to live? Discovering that her boyfriend is storing enough drugs to supply a small country, she looks for an escape route. He’s standing in the doorway – standing in the way of her freedom.

Get Baby for the Billionaire by Melody Anne at Amazon