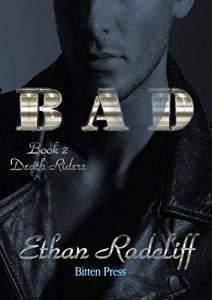 Book Two of Death Riders; BAD
Danny’s a hard man; large and brawny with desires most would shy away from. Not Xavier. She embraces his needs. Danny had all but given up on women. He sought professionals whenever he could. Xavier’s acceptance of him surprised him. He never expected her to relish a BDSM lifestyle.
As they travel together toward California, they’re dodging a tail that’s been put on them, by Xavier’s sister’s husband. They’ve already helped her sister and Conrad, Danny’s best friend leave Georgia and who are now heading toward Canada.
On his friend, Conrad’s recommendation, Danny plans to join the California chapter of the motor cycle club, Death Riders, a club that prides itself on staying below the radar and the police. But will Danny’s decision destroy his newly formed bond with Xavier? Or will they both find what they are looking for.
The series continues.

Get BAD (Death Riders Book 2) by Ethan Radcliff at Amazon