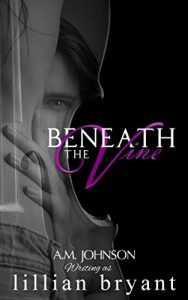 Selene Cavalier spent the majority of her time behind her cello. Her dull life was made up of dark notes, hard work and sheet music.

Bennett Monterosso did what he had to do to get his family’s winery up and running. He didn’t have time for his old ways. His quiet dominance had been silenced. His need was just waiting below the surface, until now.

Having her—it was all he could think about as he watched the young woman behind the cello.

Gage Calibri left his best friend, his home and his tarnished past five years ago. He suppressed his darker tastes, his physical appetites, and his secrets until he no longer had a choice.

It only took one night for these three lives to collide and to be altered forever.

This wasn’t what they were expecting. This wasn’t who she was. Each moment they sank deeper, each minute they felt more, each second they took her further.

Unhinged… restrained… this obsession… this love… it was all consuming.

Get Beneath the Vine by Lillian Bryant, A. M. Johnson at Amazon