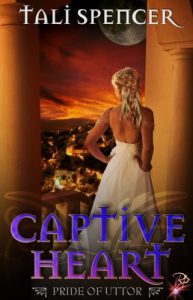 A vengeful emperor conquered her country…now he’s after her heart.

Julissa has only known life as a sheltered princess in Sebboy’s opulent but restrictive society, ruled over by strict parents and the righteous Prophets of her god. She is all but destined to a marriage of alliance until her brother kidnaps a foreign princess as his bride, and Julissa’s country becomes the target of the girl’s vengeful brother. Gaspar Leonnte may have a big nose and be the subject of ridicule at Julissa’s family table, but he doesn’t have any trouble conquering Sebboy.

While fleeing the city, Julissa falls into Gaspar’s hands and everything she ever knew changes. When a misunderstanding brings Julissa to his bed, the victorious emperor sees no reason not to enjoy his pretty captive for the night. Julissa should refuse him and honor her duty to her family and Prophet, but how can she fight the passion Gaspar awakens… even if doing so might mean her life?

Get Captive Heart (Pride of Uttor Series, Book One) by Tali Spencer at Amazon