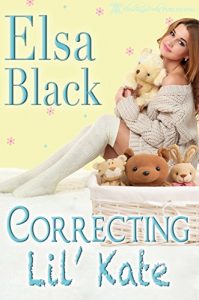 For years, the Eden Institute has provided a haven for wealthy men seeking to train and live with their submissive age play partners in a safe, protected environment.

The powerful patrons of Eden have equally powerful connections, but when scandal threatens the man tasked with providing security for the institute’s residents and Littles, the future of the Eden family comes under threat.

CIA operative Nick Overmann never thought the end of his loveless marriage would result in his sensitive personal information being leaked to blogger Kate Livingston, whose ambition has her hot on the trail of the biggest story of her career.

But Kate’s involvement puts her in peril, and she’s unaware of the danger she faces until she’s taken into custody and given a choice—complete personal and professional ruin or relocation to the custody of the man she’d tried to destroy.

Nick knows bringing Kate to Eden is a gamble. But outside its walls, her life is in danger. Can he transform a defiant former journalist with a grudge against authority into his obedient Eden Little? Will the secrets Nick and Kate keep upset the harmonious balance of the Eden family? Will Nick’s attempts to repair the damage of the scandal succeed, or is the end of Eden inevitable?