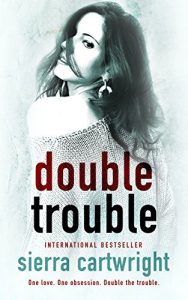 One love. One obsession. Double the trouble.

This time, he won’t take no for an answer.

Helpless, trapped by the glare of a spotlight at an auction she never agreed to participate in, Bridget is stunned when bidding for a weekend with her goes higher and higher.

She’s frantic when she realizes the gorgeous, successful Daniel Armstrong has won her. For years, she’s been attracted to the renowned heartbreaker, but she’s kept him at a distance to protect herself.

When he claims her, she believes things can’t get worse. Then he introduces her to his identical twin, Jacob. Suddenly, she’s faced with not one, but two men determined to make her every fantasy come true and take her to the heights of submission.

Get Double Trouble by Sierra Cartwright at Amazon