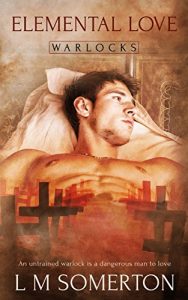 Book 1 in the Warlocks series

An untrained warlock is a dangerous man to love.

On his twenty-first birthday, Evrain Brookes discovers he is an elemental warlock. The spell suppressing his talent lifts and he has to get used to a whole new existence. The protection that kept him safe during his childhood is gone, his skills are wild and uncontrolled and there are those that seek to use him for their own gain.

Evrain’s grandmother is a witch, his godfather another warlock. Between them they do their best to keep Evrain on the right path. He learns that in order to gain control of his formidable powers, he will need to ‘channel’ through a life partner, a process that happens only with consent and through love. But how will he ever find a man prepared to put up with a Dominant warlock for a boyfriend?

Dominic Castine has no idea that Evrain’s grandmother sees him as a prospective partner for Evrain. He tends her garden and she teaches him about herbs—a trade-off they both enjoy. He is drawn to Evrain’s charismatic presence but doesn’t understand why he wants to drop to his knees and submit to him.

When Agatha is murdered, Evrain and Dominic are thrown together as she manipulates them from beyond the grave. Dominic becomes the pawn in a terrifying game between warlocks whose powers he barely comprehends.

In the end, lives will depend on his courage, his willingness to grant Evrain control and the power of love.

Get Elemental Love (Warlocks Book 1) by L.M. Somerton at Amazon