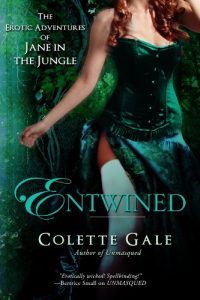 Darker and more intense than Fifty Shades of Grey, Entwined–and the subsequent volumes–are not for the faint of heart.

~~~
When not-as-proper-as-one-would-think Victorian woman Jane Clemons convinces her father to take her on an expedition in the jungle, her only goal is to find her lover Jonathan, who disappeared three years earlier. She and her father, along with Jonathan’s trusted friend Kellan Darkdale, set off on their journey.

But shortly after their party arrives on the coast of Madagascar, Jane finds herself enthralled not only by the freedom and beauty of the lush jungle, but a reclusive wild man who seems to be fascinated by her.

This series is for mature, over-18 readers who’ve enjoyed The Story of O and Anne Rice’s Sleeping Beauty–or who thought E. L. James’s Fifty Shades of Grey was tame.