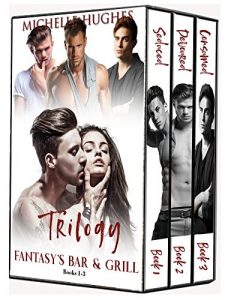 Welcome to Fantasy’s where what we’re serving behind closed doors is hotter than anything you can order off the menu!

After being fired from her paralegal job for refusing to sleep with her boss, Zoey is offered a new position writing up contracts for pleasure. Little did she know that her four new sexy bosses were just as interested in her skills outside of the office. The only difference this time is that she’s more than a little interested in what these sexy billionaire playboys have to offer.

Considering herself frigid after her one, and only lover gave her a crappy introduction into sexuality, she’s not sure that what these gorgeous men offer is something to be feared or indulged in. Writing up sexual fantasy contracts is one thing, was Zoey ready to explore a few fantasies of her own? Even if she was, could four men be a little too much for a woman that believed pleasurable sex was one of the biggest lies men used to gain what they wanted in the bedroom?

Get Fantasy's Bar & Grill Trilogy by Michelle Hughes at Amazon