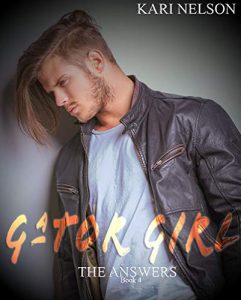 In Book 4, everything escalates. Stephen is no longer playing around with wanting her, but putting everything he says into action, BIG TIME and no holds barred, but does he go too far?

Innocent, but by no means sweet, Kelsey starts out wanting to do the right thing, but she has a curious nature about her that wants to know everything, and that gets her into trouble. And she ends up getting suckered in, once again, by Stephen. Before she knows it, everything that she said she would never do, she is doing! It gets hot as hell and Stephen is just warming up.

Kelsey puts her demands on Stephen – pointedly, that he must stop sleeping with his friend Nicollet. He complies, but now she is being tasked to fill the void in his bed, but she still hasn’t told him all the secrets that she is hiding from him and they are getting in the way.

Stephen is getting closer to the truth about Kelsey, and she is trying her hardest to make it a non-issue, but she is running out of time because Stephen is always twenty steps ahead of her.

Kelsey did not expect to lose herself to HRH Prince Stephen, but there isn’t anything that she can do about it when her body is in control of her mind. Her heart is still torn between two men, while she is trying to play in this Royal world of opulence and power, but she’s winding up getting played from beginning to end.

Love him or hate him, or just hate that you love him; he will definitely steal your heart and take you away to fulfill your greatest of fantasies and show you desires that you never knew you had. He is after all a titled Prince, HRH Prince Stephen Lyons!

Get Gator Girl: The Answers – Book 4 by Kari Nelson at Amazon