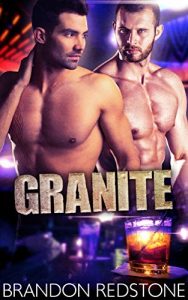 Sometimes the greatest rewards only come after the biggest risks…

Kelly Donoghue has always believed that helping young men emerge from the closet into the brave gay world of the L.A. club scene was part of a community service that only he could provide. Yet it was starting to seem that with each new casual encounter and night of steamy, no-strings-attached sex, Kelly was simply adding one more brick to the granite fortress around his own heart. Even for a man like him, not having someone lasting to share his own life with was finally taking its toll.

Luke Anderson has been behind the bar at the Granite club for at least as long as Kelly has been a regular, and despite watching him leave with a new man practically every week, he’s been harboring a crush that he has never acted on. Aside from complimenting him on his cocktail making skills, Kelly barely seemed to notice that Luke was alive.

But now Luke is facing a cross country move, giving him the opportunity to leave everything behind and start fresh in New York. Yet can he really do something that drastic without ever giving things a shot? Without ever even telling Kelly how he truly feels? The trouble is, Luke is very aware of the type of man Kelly is – out for a good time, not a long time – and that’s not something that Luke is looking for. But what if Kelly is looking for something more as well?

Is finding out worth the risk of having his own heart broken?

Granite is a stand-alone gay romance novel that ends with a HEA and no cliffhanger.

Get Granite by Brandon Redstone at Amazon