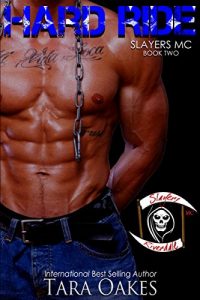 *** Warning: this book is intended for those over 18 yrs old due to violent, sexual, and mature content. ***

Dawson McCade, president of Riverdale chapter of The Slayers MC, has everything under control for the moment, although he knows it could change in an instant. The Conquistador drug Cartel is being held at bay thanks to the last minute kidnapping of the Cartel leader’s daughter, Caterina Jimenez.
Dawson knows they’re nipping at his heels, though, just waiting for the opportunity to strike. It’s up to him to think ahead and find a way to make this temporary truce between them last… otherwise it’ll be an all out war. One Dawson has doubts about winning.

He has a brand new Ol’ lady, Molly aka “Angel” and a new family to protect. He has more than enough to lose if things don’t go how he needs them to. It’s up to Dawson and the club’s enforcer, Chase Barrett, to find a way to keep everyone and everything that they love safe from the Cartel.

What happen’s if one of the very things the Cartel is after, is the one thing Chase discovers he isn’t willing to give up?
***************************************************************
Caterina, “Cat, Jimenez is the twenty-three year old daughter of one of the most powerful drug Cartel leaders in Mexico. She hates the life she’s been born into, hates everything about the power and wealth her family has amassed. Convincing her family to let her study Medicine across the border in Texas was her way of escaping the life that threatens to claim her just as it had her mother.
She had done what she thought she’d never be able to… to be free.
That is, until she’s swept up and taken in the middle of the day on her way to class by a rough and tough biker named Chase. He says he’ll let her go. He says she’s not in any danger, but she knows better. She knows not to trust men like this, having seen first hand what they’re capable. So, she does the only thing possible. Cat sets in motion a plan to escape her captor. using her feminine charms to seduce and trick him, waiting for the perfect moment to make her move.
Cat has no idea how much is riding on her, how much depends on Chase being able to keep her. They’re both about to find out, in HARD RIDE, book 2 in The Slayers MC series, meant to be read in order following book 1, FIRST RIDE.