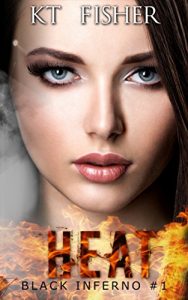 It’s Lacey’s birthday and her best friend Roxie takes her to their favourite night club. Well into their night, they catch the attention of two undercover rockers.
Cole, the lead singer of rock band, Black Inferno, and his brother Mason decide that they are sick of the after parties and want to go somewhere nobody will recognize them. The brothers arrive at a club where they are sure nobody would listen to their rock music, or at least expected to be seen at a dance club.
Here is where the foursome meet. Cole and Mason find out just how close Roxie and Lacey can be, however the girls have no idea they are spending an intimate night with the infamous Masse brothers. To them, they’re just two gorgeous tattooed men who are up for a good night of fun. But what happens when Lacey finds herself drawn to Cole, only to find out he has been lying to her all along?

Get Heat (BLACK INFERNO #1) by K.T. Fisher at Amazon