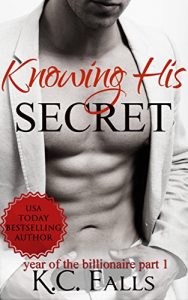 He looked like the kind of man even my mother would call smokin’ hot. Eventually, she did.

He felt like the kind of man who didn’t just break the rules, but made new ones. He led and it was follow or get out of the way.

Why did a billionaire with a voice like liquid silk and a face like a bad angel take a second look at a girl in no-name jeans, with a fifteen-dollar haircut and a beat up car she calls her “Eep” because the ‘J’ fell off long ago?

I didn’t want to know why and when I thought I knew I didn’t want to admit it. By the time I found his secret, it was already too late. His passion had me hooked like a drug. It didn’t hurt that he pulled the people I love the most out of harm’s way. A girl can get used to a knight in shining armor even when the armor has some very large dents in it.

This work is approximately 33,000 words.

Get Knowing His Secret (Year of the Billionaire series Book 1) by K.C. Falls at Amazon
Get Audiobook