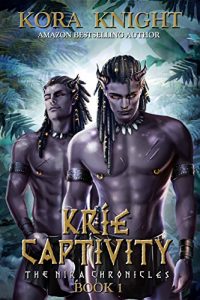 Nira. Astrum Industries’ newest charted planet. Freshly discovered. Wholly unexplored. But that won’t be the case for long. Led by Captain Alec Hamlin, a team of explorers make an emergency landing and are soon confronted by their first Niran native. A huge male Kríe packed with muscle and bearing small, black horns and fangs. Fortunately, he’s friendly. Or so he lets them believe.
With the help of his pack, the Kríe takes Alec’s team captive, intending to sell them for profit. But these Nirans aren’t just shrewd, they’re arrogant and domineering. And most of all, extremely sexual. Which explains why, on their journey to peddle their new wares, they feed Alec’s team a powerful aphrodisiac. Nothing like some decadent entertainment on the side. Soon the team finds themselves feverishly trying to resist the growing urge to get physical with their captors. But as passion prevails and unexpected bonds form, so much more is suddenly at stake. With no time left, will a shift in Kríe perspective be enough to change the fate of Alec’s team?