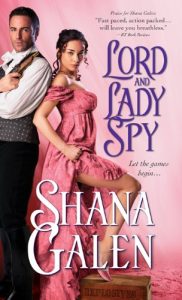 No man can outsmart him, but she’s been outsmarting him for years

Lord Adrian Smythe may appear a perfectly boring gentleman, but he leads a thrilling life as one of England’s most preeminent spies, an identity so clandestine even his wife is unaware of it. But he isn’t the only one with secrets.

Now that the Napoleonic wars have come to an end, daring secret agent Lady Sophia Smythe can hardly bear the thought of returning home to her tedious husband. Until she discovers in the dark of night that he’s not who she thinks he is after all.

Get Lord and Lady Spy by Shana Galen at Amazon