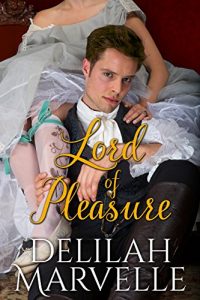 Alexander William Baxendale, the earl of Hawksford, used to a very big man. Quite literally. His girth made him only popular with his friends. Despite his weight, he considered his life to be charmed until he meets Miss Charlotte Jane Sutton. He quickly realizes winning the girl of his dreams isn’t the same as eating chocolate rolls. When she rejects him and breaks his heart, he decides the best revenge is becoming the man of every woman’s dreams. Unfortunately, he creates a name for himself even he isn’t ready to embrace. Soon, far more than just Charlotte is knocking on his door. Will he survive his own revenge? He isn’t so sure.

WARNING: This book contains strong language and sexual content that may cause respectable people to swoon.

This quirky, sexy and scandalous Regency/Victorian Historical Romance is part of a series but can be read as a stand alone.