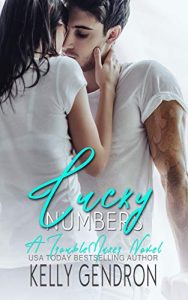 One locked safe, a troublemaking tattoo, and two determined people… add up to unlocked secrets and a love that just won’t stop.

Luke “Lucky” O’Conner is a committed bachelor. His motto…”Nobody’s ever getting this Lucky.” So when Kaley Harlow walks into his tattoo shop and somehow leaves with the only record of the numbers to his new safe tattooed on her sexy little hip, Lucky’s motto is threatened. If he wants to see those numbers again, he has to get close. Closer than he’s ever gotten to any woman. And he has three weeks to do it.
Kaley Harlow, a happily washed-up former child star, is out to ruin her reputation. She’s through with people looking at her like she’s still that innocent little girl in pigtails. Not to mention, her agent has just signed her up for a movie contract. But, really, all Kaley wants is to start a new life and finally go to college.
When Lucky happens into Kaley’s life for the second time, the hot, tattooed badass is exactly what she needs to sabotage her image. But this badass has a secret, one that could ruin more than just Kaley’s reputation.

Get Lucky Numbers (A TroubleMaker Novel) by Kelly Gendron at Amazon