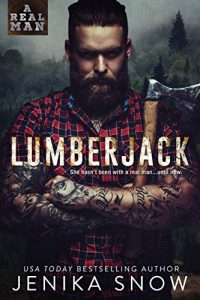 I’ve had enough of the crap that goes along with living in the city. So, I packed for a weeklong vacation in the mountains. Isolation in a cabin for the next seven days sounds like a good way to recoup and get my life back in order.

After getting lost while hiking, I stumble upon a cabin that has me questioning whether to ask for help, or if I should brave staying the night in the woods.

I left everything behind years ago after the woman I was with betrayed me. Now I work as a lumberjack and live my life as a recluse.

Being celibate for the last five years says a lot about my self-control, but I’m a man and have needs, and not giving into what I really want is hard as hell. But I can’t let myself get close to anyone, not even for a few hours. Getting close is how I got screwed over before.

As soon as I see Vivian, I know I have to have her. It’s been forever since I’ve had a woman. Because of a storm rolling in, she’ll have to stay with me overnight. We could do a lot of filthy things in that time.

I pride myself on my control, but when it comes to Vivian, I don’t know if I can keep my hands to myself.
I know I can’t.

I have needs, and it’s clear Vivian’s in need of a real man to help her unwind. I can certainly help her in that department.

Wanting: If you like OTT alpha heroes look no further! This hero has been celibate for five long years, so when he sees his woman he doesn’t bother trying to control himself. It’s as filthy as that sounds!

Get Lumberjack (A Real Man, 1) by Jenika Snow at Amazon
Get Audiobook