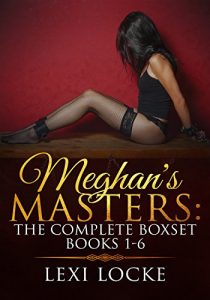 She hadn’t planned to spend her summer locked in a billionaire’s basement.

Contains all six books from the Meghan’s Masters series.

She hadn’t planned to spend her summer locked in a billionaire’s basement.

In this explicit short story of uncensored smut, Meghan finds herself naked, helpless, and at her stepfather’s mercy.

Instead of one new master, Meghan finds herself with two – a master and a mistress, and they’re going to have a lot of fun disciplining their slave for the night. Not to mention showing off their new slave to the crowded club, and watching her squirm with humiliation, and getting their money’s worth with female-female and male-female pairings, and female-male-female.

Week five, and Meghan isn’t auctioned off like the rest of the slaves: she’s left to “work the floor”, at the mercy of any man – or woman – who commands her to service them. Some of them want to leave her bound and humiliated, others want to use her body – and they don’t plan to go one at a time!

In this explicit short story of uncensored smut, Meghan finds herself forced to serve multiple partners at the same time!

Meghan has a decision to make, and Master has no intentions of playing by the rules to get what he wants.

In this explicit short story of uncensored smut, Meghan finds herself bound, helpless, and taken anally by her billionaire master!