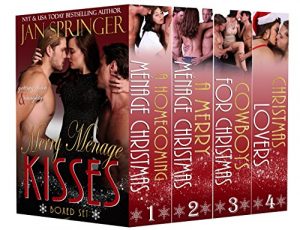 *NEW* A Homecoming Ménage Christmas ~ Rachel has a very naughty secret and she’s way too embarrassed to let anyone know about it. When the club she works at throws a Santa Fetish Ménage Night, it’s almost too good to be true. She has to figure out how to participate without anyone finding out!

A Merry Ménage Christmas ~ The snow outside is delightful but Dr. Kelsie Madison can’t remember the last time she’s had no-strings sex and that’s her first clue she’s been working way too hard. It’s time to unwind at the Key Club by indulging in a yummy Christmas present for herself. Something she’s never experienced before – a red-hot ménage.

ER Dr. Ryder Greene and his roommate, physiotherapist, Dixon Flynn love sharing their women. They’ve had their eye on cute Dr. Kelsie Madison for quite some time, but she’s a workaholic and she never has time to play.

When they learn she’ll be at the Santa Claus Ménage Night festivities, they’ll make sure they’re the ones kissing Kelsie under the mistletoe. And if they get their wish, Kelsie will be taking them home for Christmas.

Cowboys for Christmas ~ (Cowboys Online series~Book 1) Jennifer Jane (JJ) Watson has spent the past ten Christmases in a maximum-security prison. The last thing she expects is to get early parole, along with a job on a remote Canadian cattle ranch serving Christmas holiday dinners to three of the sexiest cowboys she’s ever met!

Rafe, Brady and Dan, thought they were getting a male ex-con to help out around their secluded ranch, but instead they get an attractive and very appealing female. In the snowbound wilds of Northern Ontario, female companionship is rare. It’s a good thing the three men like to share.

They’re dominating, sexy as sin, and they fill JJ with the hottest romance menage fantasies she’s ever had. Suddenly can’t bear to be alone. Soon she’s craving three cowboys for Christmas and wishing for something she knows she can never have…a happily ever after.

Christmas Lovers ~ A soldier and his nurse are falling in love and a naughty Christmas gift will ignite their passions at a mountain chalet.

Sergeant Connor Jordan, wounded overseas and sent back to the States to recuperate, just cannot stop fantasizing about the sexy nurse who cared for him.
When his brothers give him a holiday gift certificate to Kidnap Fantasies, a top-secret fantasy organization, Connor knows he’ll use their gift, if only to help him forget his wickedly delicious attraction to Nurse Sparks.

Nurse Tania Sparks has always been purely professional with her injured soldiers…until sinfully sexy Connor Jordan enters her hospital. He makes her body throb with an intense desire she’s never known. The last thing she wants is to get involved with the injured warrior. So what’s a woman supposed to do to relieve her naughty frustrations? Call Kidnap Fantasies and have them supply her with a look-alike man who’ll help her forget her sexy soldier…

When Tania and Connor unexpectedly come together at a secluded mountain chalet, their love explodes in a ménage of passion, sensuous desires and a happily forever after.