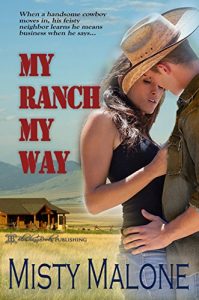 Cecelia Anderson has sworn off men after a fiasco at college, and has gone back home to stay with her dad on their ranch while she heals. While out riding one day, she spots a man tresspassing. A little wary, she masks her unease with fury when she confronts him. He claims that she’s the one who is tresspassing! Later she discovers that her dad sold some of his land while she was away, and the handsome stranger just inherited that ranch, which makes them neighbors. Realizing she was rude to him, she cooks him a meal as a peace offering.

Chase suggests they start over, and she has to admit he’s not a bad guy. He invites her to ride on his land whenever she wants, under one condition. He doesn’t want her swimming alone in what used to be her favorite watering hole. They become friends, until he finds her doing the one thing he told her not to do. She quickly learns that ignoring his rules on his land will earn a trip over his knee. Her hatred of men is rekindled, and she finds a way to get even with him. He discovers what she’s done and puts an end to it, but someone else picks up where she left off. She’s determined to find who it is so he stops blaming her.

What follows next is nonstop adventure and danger, intertwined with a real mystery wrapped up in a sweet romance.

Get My Ranch, My Way by Misty Malone at Amazon