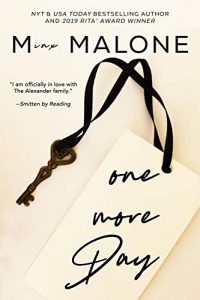 Ridley attracts nothing but bad guys. Like “won’t stop calling and then shows up in the bushes outside your house” type of guys.

So when she’s confused for her twin while hiding out from her latest mistake, for once she decides to do the “wrong” thing.

Being talented isn’t all it’s cracked up to be…

Jackson Alexander was born with the voice of an angel. But after his wife’s death, he lost his will to sing. Or to love. Now he’s a single-dad just trying to raise his sons on his own.

There’s something about Ri that makes him want to try again. But when her lies are revealed, he has to make a choice. Trust her or his heart which just might break for good this time.

– – This is a full-length, stand-alone novel. No cliffhangers, no cheating & HEA guaranteed!

Get One More Day (The Alexanders Book 1) by M. Malone at Amazon
Get Audiobook