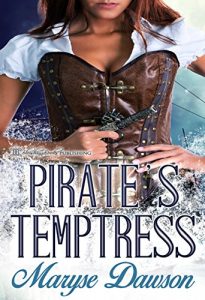 Fiery temptress Tara Flanders, Captain of her own pirate ship: the Tempest has vowed revenge upon the devilishly handsome Pirate Captain Nathaniel Butler for years. Blaming him for her father’s untimely death, she seeks to harm him in the only way she can, by stealing from him.

But Captain Butler has other ideas. Foiling her plans, he takes her captive aboard his own vessel: the Devil’s Horn where he unleashes a devastating combination of lust and discipline, that soon captures feisty red-haired Tara’s heart.

Captain Butler has wanted Tara since he set eyes on her years before and now he has her in his clutches, he never intends to let her go.

Used to pirating her own vessel, Tara must learn to obey his rules or suffer the consequences as they sail the high seas together.

Get Pirate's Temptress by Maryse Dawson at Amazon