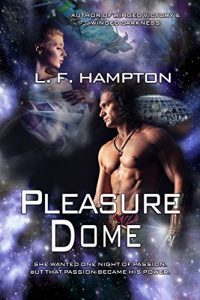 The Pleasure Dome – where the sex is out of this world…

Forced into retirement, Captain Soledad Scott, a former warship captain, has decided on a new career as a mother. She’s come to the Pleasure Dome where a computer-matched male will donate his sperm the old-fashioned way and make her dream of motherhood come true. But Sol’s worm-hole dyslexia sends her to Room 990 instead of Room 660.

Commander Gabriel Merriweather, half-breed Chakkra and master empath with the Diplomatic Corps, awaits his sterile playmate of the evening. When she arrives and orders him to pleasure her as if he were the paid sex toy, Gabe willingly complies. But the next day he learns that the woman isn’t a Dome employee, but a maternity client who has stolen his sperm and disappeared.

Sol can’t believe that the man she just spent the night with is the very man who destroyed her warship career. What will he do if he discovers that she’s carrying his child? Unwilling to find out, Sol decides to disappear.

But is the universe big enough to hide her from him?

Get Pleasure Dome by L. F. Hampton at Amazon