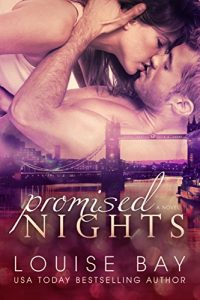 I’ve been in love with Luke Daniels since, well, forever. As his sister’s best friend, I’ve spent over a decade living in the friend zone, watching from the sidelines hoping he would notice me, pick me, love me.

I want the fairy tale and Luke is my Prince Charming. He’s tall, with shoulders so broad he blocks out the sun. He’s kind with a smile so dazzling he makes me forget everything that’s wrong in the world. And he’s the only man that can make me laugh until my cheeks hurt and my stomach cramp.

But he’ll never be mine.

So I’ve decided to get on with my life and find the next best thing.

Until a Wonder Woman costume, a bottle of tequila and a game of truth or dare happened.

Then Luke’s licking salt from my wrist and telling me I’m beautiful.

Then he’s peeling off my clothes and pressing his lips against mine.

Then what? Is this the start of my happily ever after or the beginning of a tragedy?

Promised Nights is a sexy, standalone with no cliffhanger. Some of the supporting characters have a book of their own.

Get Promised Nights by Louise Bay at Amazon
Get Audiobook