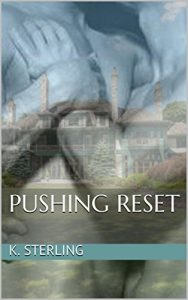 Brandon Leeds is a nerd. Growing up, he only had one friend and spent his teenage years building a software company that made him a millionaire in his early twenties. Despite his success and being what anyone would refer to as a hot nerd, Brandon found himself in a catastrophic marriage that resulted in him being a single father.

Jude Strickland is Brandon’s only friend. He’s also the exact opposite of Brandon. Musically gifted, charming, popular, easygoing, stylish and strikingly handsome, Jude could have any woman he wanted. Which was moot because Jude wasn’t into women. At night, he was having more than his share of luck with men and was content living quietly with Brandon, helping him raise his young son, Noah.

A bad party, a few too many drinks, an argument and an insane offer turn their comfortable lives inside out and challenges everything they know about themselves and each other.

Get Pushing Reset by K. Sterling at Amazon