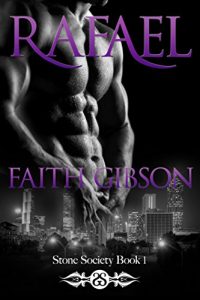 He wants to claim his mate. She wants to catch a killer. Neither saw the other one coming…

Rafael Stone has served as King of the American Gargoyles for 200 years. With no females of his species to carry on the line, Rafael is resigned to rule alone. Kaya Kane, the stunning chief of police, has him pegged as the prime suspect in a mass murder, but all Rafael can think about is making Miss Kane his mate. Bonding with humans has never happened. Until now. If Rafael can’t stop the real killer, his and Kaya’s city will never be safe.

Rafael is the first book in a post-apocalyptic paranormal series full of action, adventure, and romance. If you like Bad Ass shifters and the mates who love them, you’ll love Faith Gibson’s The Stone Society.

Get Rafael (Stone Society Book 1) by Faith Gibson at Amazon