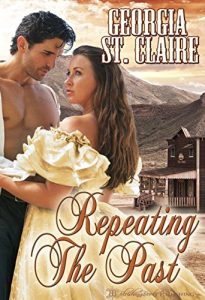 What does the minister of historical studies do when his daughter is failing her history class and doesn’t think a mere hundred years can make all that much difference? He sends her back to repeat the lessons she isn’t learning in the classroom by living in nineteenth century Nevada – a far cry from the experience she had in modern day Las Vegas!

Beth has been coasting in school. She has traveled throughout time all her life, accompanying her father on his trips as he monitors the course of events to make certain that history isn’t being tampered with. Only recently have technological advances made time travel economical enough to allow the department to send field agents out on missions on a regular basis, and now that Beth has grown up, she expects to join their ranks. However, her father has made it clear that he doesn’t intend to give her one of the prized positions, so she parties instead of studying. After all, what is the point of attending classes if she knows more than her professors about history and she can’t have what she wants?

Win can’t believe his luck when the minister of historical studies offers him the new field assignment to run a general store and buy raw ore from the miners in 1889 Nevada. While he had been going on missions with his mentor for many years when school wasn’t in session, he had ultimately chosen to make education his career – that is until he was driven to reconsider that choice by the complete disregard his mentor’s daughter had shown to his efforts. Now, just as he is about to reach his post and take up his duties, that same disrespectful girl suddenly appears and he is forced to keep an eye on her as she immediately lands herself in trouble for inappropriate behavior.

Beth never came to class and has no idea who Win is. He plans to stay in character in case this is some sort of test that the Minister of Historical Studies has devised. What else could he be thinking to send his lovely young daughter into such a dangerous town where men outnumber women by ten to one?

Get Repeating the Past by Georgia St. Claire at Amazon