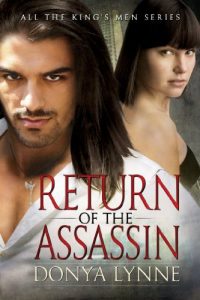 Assassin Gina Carano doesn’t have time for love. In fact, the last thing she wants is a mate, but she can’t stop thinking about Malek, the handsome AKM enforcer she met in Chicago. She’s beginning to fear he’s the reason for her crippling panic attacks, which have assaulted her relentlessly since she left him.

Malek has never dealt with the centuries-old death of his first mate, Carmen, but now that he’s formed a new mating link to Gina, he has no choice. Stuck between the agony of mourning Carmen and the despair of being without Gina, his mind fractures as he attempts to reconcile the two halves of himself. He knows deep in his soul that without Gina, he’ll eventually succumb to his suffering and die, but accepting her as his mate feels like betrayal.

When Gina botches a hit on two Dacian vampires in Miami, she reluctantly flees to Chicago, returning to face Malek once and for all to get him out of her system. But once they see each other again, it becomes painfully clear getting either of them out of the other’s system will be easier said than done. And as the Dacians close in, seeking revenge, Malek will have to choose between the past and the future before he loses Gina forever.