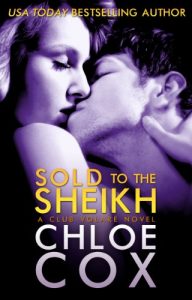 Stella Spencer is grateful for any job she can get after her divorce, even if it’s at her friend’s exclusive club. And Club Volare proves the perfect place to hide while she mends a shattered heart—until she interrupts an auction scene, and the powerful Sheikh Bashir al Aziz bin Said decides that Stella is the woman that he wants.

At Club Volare for one last wild weekend before his family requires him to settle down, Sheikh Bashir doesn’t expect to find a woman he can trust, or a woman who challenges him. But Stella Spencer is a challenge, all right: both vulnerable and guarded, beautiful and insecure, and a closet submissive. But she’s hiding something.

Stella is afraid to open her heart to love again after the way she’s been hurt, but Sheikh Bashir wants to be the Dom to show her who she truly is—and Sheikh Bashir always gets what he wants.

SOLD TO THE SHEIKH is approximately 55,000 words, or about 220 traditional print pages.