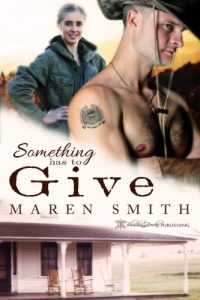 Freshly divorced and newly-discharged from the military, Quint Rydecker comes home for the first time since his wife left him, expecting to find his house empty and quiet. Then he meets Elsie Redding.
Elsie Redding thinks she’s found a place to call her own – an old abandoned farmhouse in the middle of the Utah desert – where she might finally evade the debts and hard times haunting her. Then she meets Quint Rydecker.

Now, like soldiers on opposing fields, Quint and Elsie wage war with that old farmhouse as the only prize. Both are determined to get rid of the other before winter closes in and they find themselves unwillingly stranded together. There are just two problems: no matter how much she tries, Elsie can’t seem to harden herself against the guilt of taking the handsome soldier’s family home; and no matter how much he tries, the longer they’re together, the harder it is for Quint to resist the lovely, kissable and all-too spankable Elsie Redding’s charms.