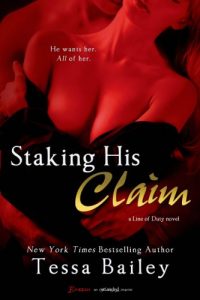 NYPD sniper Matt Donovan is in Hell. Instead of driving his best friend’s little sister home from college, he’s stuck with her roommate—a fresh-faced ray-of-sunshine with a body that makes grown men weep. There’s no way he’ll allow himself to taint the little vixen, no matter how hard she tries to tempt him, so he resigns himself to the longest—and hardest—drive of his life.

Matt’s obvious attraction suits grad student Lucy Mason just fine. She had no idea her brother’s best friend was so deliciously hot. Knowing he’d never have his wicked way with his buddy’s sister, she lies about her identity and seduces him. But Matt’s no fumbling college boy. His desires run deep—and dark—and he wants to teach Lucy what wicked really means.

Matt’s demanding appetites only make Lucy want more. But when her cover’s blown, he’s furious—even as his hunger for her becomes insatiable. Matt can’t trust anyone, least of all himself. And he knows all too well that darkness always destroys the light…