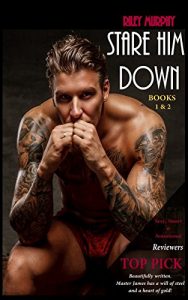 When he agreed to walk away from the lifestyle for her, he never expected she’d subversively push him back into it. Until she did…

After a dire set of circumstances forces a powerful Dom to enter into a short-term marriage with the boss’s vanilla daughter in order to save the company, James Barrington realized it was the perfect solution. A fake marriage to Michaela Donavan would hold off the imminent takeover and preserve the respectable legacy her late father had work hard over the years to build.
James examined every possible flaw to this temporary plan. Every downside but one.
His tempting little wife.
Suddenly James is not only trying to save the company, but he’s faced with the additional challenge of a modern-day marriage of convenience – that isn’t- when he winds up lusting after his bride. He may have been willing to ignore his baser instincts when he believes his spouse is too innocent to handle them, but all bets are off when he finds out the truth. She’s no more vanilla than he is.
Now, after misleading him for months, she’s expecting him to confide in her about certain aspects of safeguarding the company? That wasn’t going to happen.
Not without a price. This time around his blind trust comes with a penalty, and it’s time for her to pay up.

***This book can be read as a standalone. It contains NO cliffhanger.***