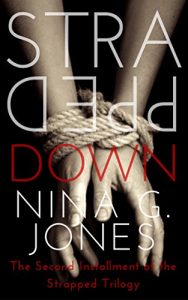 The much anticipated second installment of the Strapped Trilogy, Strapped Down picks up where the first installment concluded.

Eric is not going down without a fight, but Shyla and Taylor are willing to go to equally dark lengths to make him pay for his betrayal. In their quest to seek revenge and find happiness, deeply guarded secrets from their pasts begin to surface, revealing they are linked to each other in ways they could never have imagined.

For every secret they uncover, another seems to surface as they find themselves raveled in a web that extends much further than the confines of the darkroom. As Shyla and Taylor become more entwined with each other, Shyla learns that Taylor’s dark side is far more dangerous than she initially believed. Will Shyla continue to follow Taylor into the darkness, or is he far too gone for her light to shine through?

Strapped Down is not a standalone novel, Strapped must be read first. Appx. 92,526 words.

Be forewarned: This is a dark novel.

Get Strapped Down (Strapped Series Book 2) by Nina G. Jones at Amazon