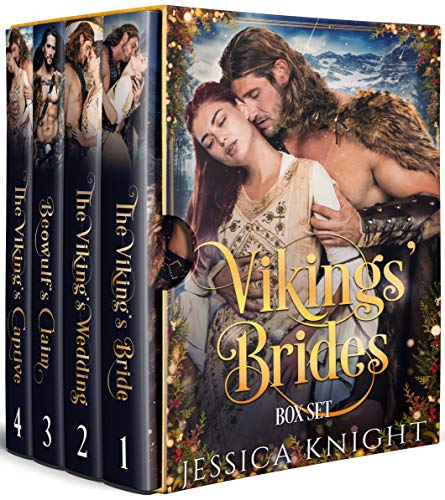 Book 1 – The Viking’s Bride
I tried to run. But there’s nothing he won’t do to have me.
I was forced to marry a ruthless Viking Warlord.
Now, I’m carrying his twins.
Could I get the happily ever after I’ve dreamed off?
Or will I always be his captive bride?

Book 2 – The Viking’s Wedding
Big, gruff, dominant… and utterly dangerous.
Einarr Thor is a beast of a man. A beautiful savage.
And not to mention we’re different in every way.
The fierce Viking Warlord wants me to be his bride.
And there’s nothing he won’t do to have me.

Book 3 – Beowulf’s Claim
I was left in the woods unconscious, on the brink of death.
He brought me to his cabin and saved me.
I became a caretaker to an orphan boy that he was raising.
But when I recovered my memory and discovered his dark secret, I ran.
I don’t care that he’d search the world for me.
I’d never be Beowulf’s Claim.

Book 4 – The Viking’s Captive
Our two families have feuded for decades.
I’m the daughter of his enemy.
We’re two people that should’ve never met.
But in one night I became his captive Princess.
Giving into his demand came with an unexpected surprise, our baby.
Once our families find out about our news…
It could end this feud or destroy us all.