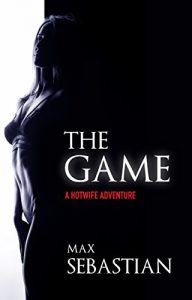 Is he playing the Game, or being played?

After a late-night dinner party gets a group of thirty-something friends chatting about adultery, Oscar MacDonald discovers that he harbors a dark fantasy about his wife’s infidelity. When wife Izzie forces his secret into the open, Oscar says his only real condition for her to sleep with other people would be for her to share all the details with him.

Izzie says she wouldn’t feel comfortable sleeping with someone then spilling the details, even to her husband. But what if she left him clues, to hint at what she did when enjoying herself with other men? Maybe, just maybe, she would be tempted to turn fantasy into reality.

They could even make a game of it.

A full-length, 90,000-word wife-sharing adventure from the author of She’s a Star.

Get The Game by Max Sebastian at Amazon