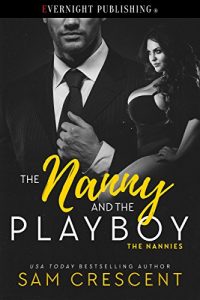 Wayne Myers is a playboy, and doesn’t have time in his life for children. When a little boy is handed to him with the claim to be his son, Wayne knows without a doubt that he’s not the father. Until he can prove it, though, what the hell is he to do with a damn kid?

Temperance Michaels has been a nanny for twelve years, and she’s tired of the constant heartache when she has to walk away. She knows she has to find something else to do with her life, so when she gets a call from Wayne, her first instinct is to turn him down. But after hearing about the young boy who has lost his mother, she caves.

Now that Wayne has a nanny, he intends to lead his own life again. But he didn’t anticipate being attracted to the raven-haired beauty. Temperance is not like any of the women he’s ever been with, and she’s getting under his skin. With Temperance and Timothy in his life, Wayne has the chance to find out what it’s like to have a family of his own, at least for a while. After temporarily enjoying having a woman and a kid, he intends to give them both up.

Will this playboy take a chance or return to his womanizing ways?

A brand-new series that will have the theme of men falling for their nanny.