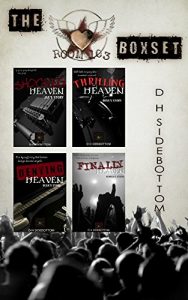 SHOCKING HEAVEN. Book 1
Leaving her past behind, Eve Hudson embarks on student life. Determined to take control of her life and move on from her turbulent past, Eve strictly orders no drama, no bullshit and definitely no relationships.
That is until she meets deep and moody Jax Cooper, the vocalist for local band ‘Room 103’.
Jax is arrogant and egotistical, an alpha male straight through to his core, but so damn hot, and Eve soon finds his relentless pursuit of her, harder and harder to resist.
But both hold tortured souls and secrets, secrets that could blow their whole lives apart…literally.
Except sometimes it’s not secrets or damaged spirits that threaten their relationship…it’s life itself.
THRILLING HEAVEN. Book 2
Boss has been in love with one woman since he was sixteen. She was his soul mate, his lover, his heart and his very essence. But she was never his and yet she was always his.
Nine years! Nine long and lonely years since he last saw her, since he last embraced her unique spark of life, and nine god damn years since he’d tasted her passion.
Then, bang! There she was, stood in front of him like a vision, like a gift presented to him from God.
But this time, Boss would make it his mission to have her, to hold on to her and to finally make her his. Completely.
He would do anything for her, and he does. He does the very thing that loses her.
So now he needs to fight; to battle and strive to get her back.
With a little help from friends and band mates, his own unique outlook on life and a tiny reprieve from God; he grins widely, begs shamelessly and just plain charms the pants off her, the only way Boss can.
Jen belongs to Boss… simple.
Stand in his way and he’ll take you down.
DENYING HEAVEN. Book 3
Bulk fell in love at sixteen. Shona was his heart, his soul, the meaning of his life.
Then she was killed… suddenly, horrifically and brutally.
He never had the chance to say goodbye, never had the chance to tell her how much he loved her.
Seven long, lonely, painful and comatose years later, Spirit, a guitarist for River’s Ink, takes Bulk’s shit, wraps it up and sucks it dry. She takes his grief and kicks it to the curb.
She wants him; she needs him and God, if he doesn’t need her right the hell back. She’s everything Shona was; fun, full of live and so utterly breath-taking she steals his breath with every smile, every word that leaves her pretty lips and each naughty twinkle in her eye.
But is Spirit what he actually needs to revive his life?
When Spirit’s secrets, a face from her past and her uncontrollable addiction to drugs and alcohol show their ugly heads, will Bulk shake his head and declare a final ‘No’ to life, or will he hold her tight, pull her close and fight her demons with her?
FINALLY HEAVEN, Book 4
Romeo has struggled with his secret for years. He has managed to keep it from not only his family and friends but the girl he has loved for years. But one night changes that. One single night threatens to destroy him, rip his life apart and alienate everyone that he holds dear. But not in the way he thinks.
Zoe has been in love with the room 103 guitarist for over three years. She has struggled to keep hold of anything in her life but when a friend makes her an offer, she can’t refuse, seeing it as an opportunity to finally take control of her life. But one night changes all that. One single night threatens to destroy everything she has known and held in her heart. But not in the way she thinks.
Nick has a secret of his own. A secret that could tear everyone around him apart. But when one night gives him what he has being craving for so long, another night reveals another need to his desires. However, the choices he has to make will make no difference once his own secret is exposed. He thinks he knows the answers, but he will soon find out that he underestimated the forces that control him.

Get The Room 103 Boxset by D H Sidebottom at Amazon